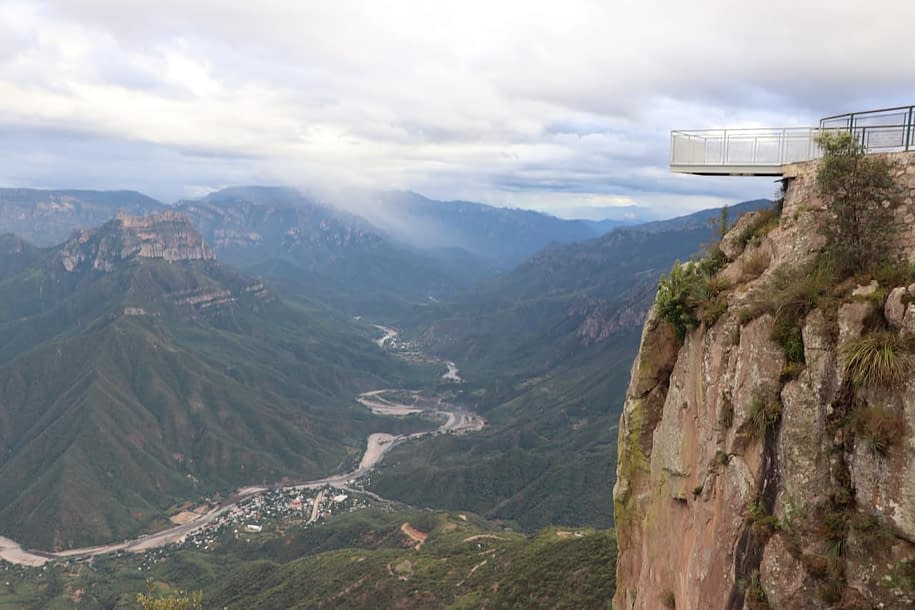 After a day trip by plane from Puerto Vallarta via Mexico City to Los Mochis (The plane landed half an hour earlier than planned!) We were picked up from the airport for transfer to our hotel in El Fuerte. the welcome already made me feel at home.

When we arrived at the Hotel Posada del Hidalgo, the best dinner of the trip, grilled freshwater lobsters was waiting, we finished the day very satisfied. After 10:00 p.m. a local guide took us on a walk through the small colonial town of El Fuerte, which was a very good idea, since the next day we had to leave the hotel around 8:00 in the morning. to start the journey with the CHEPE train – The only remaining railway line in Mexico that goes from Los Mochis to Chihuaha.

The special thing about this route is the difference in altitude from 200 to more than 2500 meters above sea level. On the first day, the train ride took us from the plain around El Fuerte through many bridges and countless tunnels, past impressive ravines and waterfalls, until we reached the Copper Canyon.

We arrive in Bahuichivo around noon. Bahuichivo is a town that is in the middle of mountains where the inhabitants live from tourism and agriculture. Tonight we stay at the Mission hotel in Cerocahui.

The next day our visit to Cerro del Gallego, the main attraction of the day, had to be canceled due to a tremendous rain. However, the driver took us to see some viewpoints that offer a wonderful view. Instead of enjoy the view towards the Urique Canyon viewpoint we have received a very detailed talk about the history of the Barrancas, the traditions of the Rarámuris and the Caballo Blanco ultramarathon.

The Caballo Blanco Ultramarathon became famous in 2003 with the help of Micah True. Micha True also called Horse White for the Rarámuris indigenous people, he was a runner who participated in the ultramarathon.

Later they took us to the train station in Bahuichivo. The train was only 15 minutes late, which is normal for this train route. We arrived at Posada Barrancas where we spent the night at the Hotel Mansion Tarahumara located at the edge of the canyon.

The next day, we were also able to enjoy the impressive view of the Barranca, because the sun shone again even though we only had a few degrees. It was February and in the Sierra it is also winter. With Guadalupe, our guide that day, we went on an excursion to the “Barrancas del Cobre” National Park to Piedra Volada, we enjoyed the senational views towards the three Urique, Cobre and Tararecua canyons. We also visit a Rarámuri family that lives in a cave on the edge of the Barrancas.

(The Raramuris do not live in large towns or cities, but still live in small family groups scattered across mountains, caves or adobe houses). Instead of an exciting cable car ride, we decided to enjoy a rich coffee and good company. Lupe informed us many technical details about the construction of the cable car, the only one in Mexico without intermediate towers.

Shortly before 3:00 p.m., the CHEPE train whistled again from the train station in Posada Barrancas to announce its departure to Creel. Before reaching Creel, the train reaches the highest point of the route after making a big curve of 360 °.

On the fifth day of our train trip, we visited Lake Arareco in Creel. There the winter time also means dry season, the lake level was very low. We also liked to visit the valley of the “Monks” with its strange rock formations.

On the way back we visit a Rarámuri, who works and lives in a rural community in Mission San Ignacio.

In the afternoon we continue the last stage of the trip to Chihuahua, arriving around 9:30 p.m., thanks to the good restaurant on board the train, we did not arrive hungry.

As planned, we were picked up promptly at the train station in Chihuahua to take us directly to the Plaza hotel. We wanted to end this part of the trip by toasting with a glass of wine or water. To our surprise the bars were already closed and the city seemed half empty. Luckily they recommended a place to one side of the cathedral, where we finally toasted with a glass of red wine for our excellent trip. We wanted to find out because the city was so lonely but we did not receive a satisfactory answer.

We end our trip through northern Mexico with a historical tour of the city of Chihuahua. The next day we flew to Cancun.

The people of the Sierra are very relaxed and laugh a lot, unfortunately my Spanish was too poor, to be able to

This trip aboard the train CHEPE – CHIHUAHUA – PACIFICO – was perfectly organized and we liked it very much, I would like to do it again, with an additional stay of 4 days in Barrancas del Cobre, to be able to do some walks, hiking, take the zip line and do rappelling on the via Ferrata.

Congratulations to Ms. Gonser – all trip planning including key points on the tour, support and

Coordination of services of the Amapa-Tours team, it was very good, everything went as we expected. The hotels were very well chosen.

Equipped with address lists, route suggestions, maps and the navigation system, we have traveled very confidently and safely.

A small suggestion, a Chevrolet Matiz is not suitable for an individual tour in this region. We decided to exchange it for a bigger vehicle and we were lucky. Europ-Car Cancun was able to get us a suitable car without making us wait long.

In general I was very surprised by the punctuality of all the transfer services, I would not have expected it that way.

Individual tour in February 2018 Detlef C.W. and U. Boehnert